What is it? -The study of the formation and history of words related to a subject or topic that focuses on word patterns, spelling, grammar, and language history.
Slogan: Every Word Has A Story

• Expanding vocabulary through affixing
• Clarifying the parts of speech of the English language
• Recognizing cognates of English and related languages
• Understanding the phonological and morphological basis of English
• Learning how to create descriptive, meaning-bearing sentences
• Researching the origin of words
• Making the unabridged dictionary a research companion

• Removing (or never teaching) parts of speech shibboleths (e.g. a noun is a person, place, or thing)
• Introducing accurate linguistic terms (e.g. off ixes, inflections, nouns, verbs, etc.)
• Teaching Defining Format for linguistic def in it ions
• Having access to the Random House Unabridged Dictionary and Internet resources on language and languages

• Learning English grammar accurately (as it really is) improves oral and written communication
• Learners need structure and learning about grammar is learning about structure
• The more words one knows, the more ideas one can grapple with
• Applying learning enhances learning
• Learning through stories heightens interest and appreciation
• Language is culture and relating language with culture expands one’s intellect and intelligence

Application
The study of morphology and etymology is the umbrella under which we learn our alphabet, spelling, word forms, sentence structure, cognates, word play, language history, and whatever else is language related. By learning, for example, the full story of the word “algebra”, we learn that it comes from a person named al Khwarazmi), a mathematician from present-day Uzbekistan who had studied the mathematics of the Hindus; he developed that basic principles of what was to become algebra, from the Arabic word aljabr meaning the •reunion of broken parts”, and was an early impetus for the acceptance of the idea of zero in western thought. The word •algorithm” comes from this mathematician’s name. Algebra was brought from ancient Babylon, Egypt and India to Europe via Italy by the Arabs.

Now that you have realized, by taking the “test” in Figure 6.1, that nouns go far beyond “things,” you can introduce your students to the wide, wide world of nouns in the English language. Begin with Figure 6.3, the first step in the Categories of Nouns activity. This activity can be taught with students starting in the third grade (and possibly before) and used throughout all grade levels as an extension of vocabulary building. In the Notebook, have students enter the topic (Categories of Nouns); then, on a double-page, have them divide their papers into four columns, one marked “Persons,” one marked “Places,” one marked “Objects,” and the last one marked “Other.” Then have students follow the instructions in Figure 6.3.

Even when students are not sure about the meanings of the words that are not persons, places, or objects, they usually know that such words are not “things,” a term many school grammarians use as a substitute for the word object. When students are given the option to put words in a list marked “Other,” they immediately know that a dog is an animal and Christmas is a holiday. Some students realize that joy is a feeling or emotion. Although some school grammar books have added “idea” as part of the definition of noun, this still doesn’t enable students to identify a dog, joy, or Christmas, as a person, place, thing, or idea, since a dog and joy can hardly be thought of as ideas, and Christmas is a holiday or celebration. 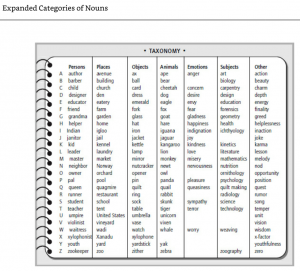 You can now expand the classification of nouns to include other categories, such as animals, emotions, and school subjects, again leaving a place for “Other.” After a while, the list of nouns might look like the one shown in Figure 6.4 on the next page. Note that the Taxonomy format of listing the letters vertically has been added to this table.

Before continuing to the next group, noun categories, we suggest that students compose sentences using the strategy Composing With Keywords, as described in Chapter 3. Students select three words from three different noun categories, one of which should be from the “Other” column. They then compose a sentence using the three words in one sentence, with the option to change the forms of the words if necessary. Here are several examples taken from students in different grades: My grandma bought me a monkey that had a bad temper. I get a lot of pleasure when my teacher tells me that I got an A in mathematics.